“In the Special Autonomy [Otsus] Law No. 1/2021, which has now been amended to Special Autonomy Law No. 2/2021, articles 45-47 recommend the establishment of a human rights court in order to solve rights violations. Since Otsus has been rolling in Papua, the government has not set up a single human rights court in Papua,” Gobay told reporters, representing a number of NGOs and activists in Papua at a press conference held at the LBH Papua Office on Sunday, August 14, 2022.

Gobay thought the trials of human rights cases post the year 2000, such as the Bloody Wamena and the Bloody Paniai, should have been resolved in the Human Rights Court in Papua.

“Cases that occurred before 2000, such as Tanjung Priuk, Timor Leste, and Bloody Abepura, have been tried. So, specifically for cases of gross human rights violations that happened after 2000, such as the Bloody Paniai, they can be resolved in the Human Rights Court in Papua, in accordance with the mandate of the Special Autonomy Law,” he said.

Gobay was worried that if the trial was held in Makassar, the victim’s family and witnesses could not attend the trial. “When the trial venue is far away, there is no one to protect the living witness and the victim’s family. Moreover, regarding the shooting of four students, the Attorney General’s Office [AGO] only named one suspect, when there were several people who did the shooting,” he said.

“What about the results of the investigation by the National Commission on Human Rights [Komnas HAM]? Their report says there are many perpetrators but why only one name has been tried? The AGO has only determined IS, a retired officer, as the sole suspect in the Bloody Paniai tragedy that occurred on December 8, 2014. What happened actually?” he added.

Secretary of the United for Papuan Truth (BUK Papua) Nehemia Yarinap said their party was very pessimistic about the process of resolving gross human rights violations in Paniai, “The Paniai case will end up like the Bloody Abepura case, wherein the perpetrators were acquitted”.

Yarinap said the AGO often delayed the process of revealing the perpetrators, and there was always a delay in determining the suspect. It is also suspected that there was the disappearance of evidence so that the perpetrators could not be charged with the law according to their actions.

“We suspect that in the disclosure of perpetrator, there was intervention from related parties. Because Komnas HAM has determined who the perpetrators are and handed over their investigative report to the Supreme Court and the Attorney General’s Office,” Yarinap said. (*)

Jayapura, Jubi – The Military Court III-19 Jayapura will hold a hearing on February 6,…

Jayapura, Jubi – Intimidation and terror are still being experienced by journalists in Papua. Most…

Jayapura, Jubi – The Papua Coalition of Law Enforcement and Human Rights as the legal…

Jayapura, Jubi – The families of victims of the murder and mutilation in Mimika Regency… 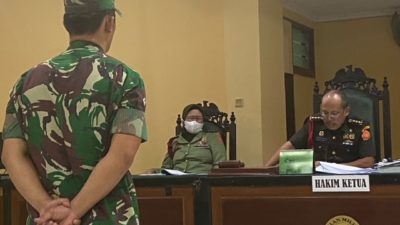