Jayapura, Jubi – A 35-year-old Papuan man named Moses Erro died after got shot during the riots that broke out in Mappi Regency, South Papua. Erro’s family member Rovin Sirmi said Moses Erro was shot in the thigh and knee.

“Moses Erro died on Saturday, December 17, 2022. The family ask that the perpetrators of the shooting be punished according to law,” said Rovin Sirmi when contacting Jubi in a telephone call on Saturday.

Rovin Sirmi, who is a youth leader of the Wiyagar Tribe in Merauke Regency, also clarified the Papua Police’s statement that the riot in Mappi was triggered by a dispute between two groups of residents who were under the influence of alcoholic beverages on December 14, 2022.

The statement was previously conveyed by the Papua Police Liaison Officer in South Papua Province, Sr. Comr. Erick K. Sully. Rovin Sirmi explained that the incident began when a resident, Mohan Bapaimu, extorted a teenager named Martinus Base on December 14.

The incident occurred in front of Obaa 1 Vocational School in Mappi. The victim was going to the market to buy fish. However, on the way, the victim was extorted by someone who was allegedly under the influence of alcohol.

“Martinus Base did not comply with the request because he had no money other than the one given to him to buy fish. There was an argument before the alleged perpetrator injured the victim with a sharp object. The alleged perpetrator then ran to the Mappi Police Station seeking protection,” he said. 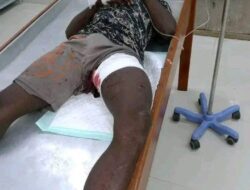 Martinus Base’s family came to the police station and asked the police to hold the perpetrator accountable. “But the police asked them to go home,” said Rovin Sirmi.

He said that the victim’s family, who were angry with the perpetrator, spontaneously damaged the police car that just came. One police officer was hit by a sharp object.

According to Rovin Sirmi, the security forces started firing uncontrollably and hit several residents at the location. As a result, ten residents were shot. Several police officers were also injured.

“We as the family need to clarify the news based on police information that the incident was triggered by two groups of drunk residents. My brothers were victims of stabbings and shooting, they were not drunk,” said Rovin Sirmi.

High school student Soni Pasim (17) was shot in the thigh. He was also allegedly hit in the head by security forces using a gun butt four times, and handcuffed to a hospital bed while undergoing treatment.

Jayapura, Jubi – The body of First Pvt. Ferdian Dwi Sukma, a personnel of the…

Jayapura, Jubi – The Military Court III-19 Jayapura will hold a hearing on February 6,…

Jayapura, Jubi – Intimidation and terror are still being experienced by journalists in Papua. Most…

Jayapura, Jubi – The Papua Coalition of Law Enforcement and Human Rights as the legal…

Jayapura, Jubi – The families of victims of the murder and mutilation in Mimika Regency…