Makassar, Jubi – The Makassar Human Rights Court on Monday, October 3, 2022, continued the trial of the Bloody Paniai gross human rights violation. At Monday’s hearing, three police officers were presented as witnesses to the shooting that killed four students in Enarotali, the capital of Paniai Regency, on December 8, 2014. Testimony from former East Paniai Sector Police Chief Petrus Gawe Boro sparked a debate between the prosecutor and legal counsel of the defendant.

Isak Sattu is charged with two crimes against humanity which carry the heaviest penalty of death, and the lightest penalty of 10 years imprisonment.

Petrus Gawe Boro was the first witness whose testimony was heard at Monday’s hearing. Petrus Gawe, who wore blue clothes when delivering his testimony, explained that from October 2013 to April 2017 he served as Head of the East Paniai Sector Police with the rank of Adjunct Police Commissioner (Adj. Comr.). After that, he served as Deputy Head of the Paniai Resort Police until his retirement with the rank of Police Commissioner (Comr.).

Petrus testified that on the morning of December 8, 2014, he and four of his men went to the Paniai Police Headquarters to attend the morning roll call there. During the roll call, Paniai Police Deputy Chief Comr. Hanafiah said there was a roadblock at Gunung Merah, on the road connecting Enarotali and Madi. The morning assembly was expedited.

After the assembly, Petrus, along with the Head of Operations of Paniai Police, Comr. Sukapdi and other personnel went to the roadblock. There, hundreds of residents had gathered with spears, axes, and machetes. The mob blocked access to the road by placing concrete electric poles, tree trunks, and stones on the road.

According to Petrus, the mob was angered by the beating by a number of Indonesian Military (TNI) soldiers against Benyamin Kudiai, Yosafat Yeimo, Noak Gobai, and Oktofince Yeimo the night before at Pondok Natal Gunung Merah, Enarotali-Madi Road Km 4.

Petrus said his party tried to persuade the residents to open the road but they refused. They said TNI soldiers must be held responsible for the beatings that occurred on December 7, 2014.

Petrus said one of the residents who carried an axe attacked the car he was carrying. “Our car stopped. One resident came with an axe,” he said.

The resident then hit the windshield on the right side of the car and the body until they broke. “So we retreated, and I reported the situation to the Deputy Head of East Paniai Resort Police, Comr. Hanafiah,” Petrus said.

A few minutes later, Hanafiah arrived at the blockade site with Paniai Deputy Regent Yohanis Youw. Petrus and his men were ordered to move away and retreated to about 30 meters from the site.

Petrus then saw Hanafiah negotiating with the crowd. The situation became increasingly heated as the negotiations failed to reach an agreement.

Suddenly, a gunshot was heard, the source of which was unknown. The police retreated before Yohanis Youw managed to persuade residents to open the blockade.

At about the same time, about eight TNI Rider/Timsus 753/Battalion 753/AVT Nabire soldiers arrived at the location by car. Seeing this, the masses became angry and attacked the car. The soldiers and police again retreated away from the masses.

“When we retreated, the community cursed at us. But, there was one TNI member who might have felt confronted and replied to them with curses, as well as saying things like, ‘Do you want to end up like last night?” said Petrus.

Sukapdi, who at the time was the Head of Operations of Paniai Police, was the second witness at Monday’s hearing. Sukapdi gave testimony similar to that of Petrus.

He also explained the case of persecution committed by a number of TNI soldiers against a number of youths who made a Christmas hut at Gunung Merah on December 7, 2014.

“From the information we received, the persecution on December 7 was carried out by the TNI. There were about 8 TNI members. They were wearing half-service clothes, namely striped pants and t-shirts. They also carried weapons. There were residents who were hit with gun butts,” said Sukapdi.

According to Petrus, at that time the weapons in the storage room were no longer in place because they were secured by Petrus’ men. Petrus said this was done to anticipate the possibility of the masses entering the East Paniai Police Headquarters and taking away the weapons.

“That’s why I was angry, I didn’t see them come out. I asked them to come back in [to the headquarters],” he said.

Following Petrus Gawe Boro’s testimony, the Public Prosecutor argued with the legal counsel of Isak Sattu. This was because Petrus testified about the gunshots that were heard during the negotiation between the police and the mass at Gunung Merah. He said he heard Yohanis Youw call the gunfire a form of “third-party interference”. “The Deputy Regent said there was interference from a third party,” Petrus said of the shots heard before the Bloody Paniai tragedy.

“Who is the third party?” asked the prosecutor.

Yunius Pamatan, Isak Sattu’s legal counsel, tried to dig up a detailed story about the shooting that Petrus mentioned. Petrus said the gunshot was heard twice and the sound was clearly audible. Yunius then asked for clarity about Petrus’ statement that the two shots were fired by the armed group.

However, Yunius’ question was interrupted by the prosecutor. The prosecutor reminded him that the allegation that the shots were fired by the armed group was an opinion or conclusion made by Petrus himself.

On the other hand, Yunius rejected the prosecutor’s interruption. “I think it’s a field fact,” said Yunius.

Petrus then repeated his testimony that he heard it from a conversation between Hanafiah and Yohanis Youw.

Chief Judge Sutisna Sawati finally took over the debate. Sutisna asked Petrus whether he knew the fact of the existence of the armed group in the series of events on December 8, 2014.

Petrus said he did not know any fact that there were armed groups or victims of armed groups in Enarotali on December 8, 2014. (*)

Jayapura, Jubi – The use of treason charges against Papuan activists has often been criticized… 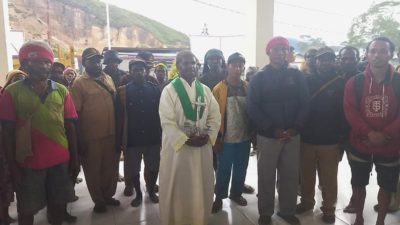