Catherine Delahunty wonders why we’re not more moved by what’s happening in West Papua, a Pacific neighbour where Indigenous people are fighting for independence.

Jayapura, Jubi – When I first met West Papuan activist Paula Makabory, she told me she came from the land of the “Morning Star”, home to the bird of paradise. In the same breath, she said her people were living in an occupied country — and they were bleeding.

I had no idea at the time where West Papua was, but meeting Paula changed the world map in my head.

This is a country 1200 kilometres north of Darwin. It’s the northern half of the huge island of Papua New Guinea. It was colonised by the Dutch in 1898, and then on their departure in the 1960s, it was occupied by Indonesia — traded off, with the support of the UN and the west, for its rich resources.

The West Papuans call it the Land of the Morning Star because that’s their flag — and they can be killed or jailed for raising it.

As Paula said the first day we met: “We are a Pacific people and we want our country back.”

Indonesia is as brutal in its tactics as all colonisers. Paula can’t return home because of her leadership role in this struggle. In 2006, she was nominated for the Nobel Prize as one of the “1000 Women for Peace”. But these days, she’s in Australia, working night shifts in a meat factory in a town in Victoria.

She’s homesick to the heart but staunch to the bone in her commitment to the Free West Papua cause. When she’s not at work, she’s online to keep the world informed of the latest arrests, deaths, destroyed forests, polluted rivers, human rights abuses, and the increasing militarism in occupied West Papua.

There’s not much time for her love of soccer and music. Political analysis is her focus.

Our friendship has been a light in my life. During visits to my office in parliament, Paula would grab the guitar and do her best to teach me West Papua freedom songs in pidgin and the traditional songs of her own language group. (It’s a country of more than 1100 different languages.)

Paula went to university in Jayapura, West Papua, but she can’t use that education at home for the good of her people. She’s a refugee and is doing the best she can to support the struggle as well as caring for her son and daughter.

I went to Melbourne some years ago and met the kids. Paula hosted a party for me, and Rex Rumikiek, a renowned Papuan elder and leader, came from Sydney to talk with us about strategy.

Rex has been to Aotearoa a number of times and has longstanding links with tangata whenua leaders such as the Harawira whānau. Through Paula, I also met other activists in exile and hosted them in our parliament.

The current leader of the movement in exile, Benny Wenda, was refused the right to speak in parliament in 2013 because the Speaker, David Carter, thought it might upset Indonesia. But Benny wasn’t silenced. In fact, he got more media than we could have hoped for, which is unusual.

Every time Paula or other leaders have visited, we’ve tried to get good coverage of the West Papua story. But  we can’t rely on any journalists apart from those in the  Māori and Pacific media and RNZ International. And the Pacific Media Centre at AUT have always been on to this issue.

Back in West Papua, foreign journalists are virtually banned or heavily monitored, and the local media run huge risks by telling the truth. So it’s no wonder so many people in Aotearoa know much more about Indigenous issues such as Standing Rock in the US, or Palestine, than they do about West Papua.

A few weeks ago, a group of us met with Nanaia Mahuta, our foreign affairs minister, to seek support for West Papua. She was generous with her time and gave us a fair hearing, but we await results.

One issue we raised with her was the urgent case of Victor Yeimo. I met Victor in Canberra when Paula and I were with a group hosted by the Australian Greens at their parliament. Victor is the international spokesperson of the non-violent KPNB group of activists within West Papua.

He’s now in prison awaiting trial for treason charges. He was arrested several months ago for being an organiser of a “Papuan Lives Matter” anti-racism march. When he was arrested, a Papua police chief said: “Let him get old in prison.”

The trial may start next week but the word from West Papua is that he is sick, coughing blood. There are street marches in West Papua calling for his release. On one side, there are the Indonesians firing water cannons at his supporters. On the other, there’s Amnesty International demanding his release.

Nanaia wrote to our group saying that New Zealand had raised his case with Indonesian officials. But that won’t be enough. There are no consequences for Indonesia at a diplomatic level.

But we’ll keep campaigning for his release. I think of Victor every day — a small man with a star on his cap, waiting in prison, joining the long list of Indigenous leaders who dare to challenge colonisation.

Meanwhile, on the streets and up in the highlands of West Papua, the pressure builds. The military and the huge flow of Indonesian migrants are pushing hard on the Papuan people in their own lands — and any armed resistance by the Papuans to the carve-up of their country is met with violent retribution from the Indonesians.

There are growing numbers of Papuan refugees on the Papua New Guinea border. Somewhere between 7,000 and 10,000. And, in parts of the highland mountains, villages have been burned or bombed.

The once wholly Papuan population is now down to 50/50 with their colonisers.

Paula carries no hate for the mainly Javanese migrants who’ve been moved to West Papua. She believes peace is possible and that one day her country can be a free nation, governed by West Papuans, and welcoming all to their environmental paradise.

But it’s a race against greedy companies cutting down forests for palm oil plantations and against miners hollowing out sacred mountains for gold.

The Indonesian government also seeks loyalty to the occupation by belittling West Papuans as “monkeys”, undermining their cultures and pushing messages like “eating sweet potato makes you stupid, eating rice makes you smart” (heard by a Māori film crew filming a cultural festival in Wamena in the highlands of West Papua).

I’ve tried talking to some New Zealand dairy farmers who use palm kernel to feed their cows from the palm plantations of Papua. I’ve told them about the destruction of the rainforest and the communities who’ve lived within them for 40,000 years. But they don’t seem to care.

Our solidarity groups try and stop people and companies from buying decking timber from the rainforests of West Papua. But not everyone can see past greed. Stupid isn’t about eating rice or sweet potato. It’s about refusing to connect what you buy with where it comes from.

I once asked Paula about the courage of her people and their willingness to risk their lives. She said: “We are already dead, so we have nothing to lose.”

She didn’t mean she was ready to pick up a gun. She meant that, for them, a risky and dedicated life was not a choice. West Papuans who believe in a peaceful solution don’t criticise their relations who’ve picked up guns, because they understand what drives them. And, if we haven’t had to face such choices, who are we to judge?

I and other supporters are heartened by the growing number of younger Indonesians, Pacific Island peoples and governments, and activists in Aotearoa who are supporting freedom for West Papua. But for our friends in exile there is a longing for home that no amount of kindness can replace.

To be Victor in prison or Paula in exile is to live a life I’ve never had to imagine. So I think we have a responsibility to act under their direction. They are our neighbours and their story once known is horribly familiar in Aotearoa.

The Land of the Morning Star and the Land of the Long White Cloud — both are the ancestral homes of inspiring people challenging the rest of us to wake up and recognise their sovereignty. (*)

Catherine Delahunty is a Pākehā activist in environmental, social justice, and Te Tiriti o Waitangi issues. She was a Green MP for nine years and lives in Hauraki. She mainly works in the campaigns against multinational goldmining in Hauraki and is active in the national solidarity network for a Free West Papua. She is a writer and a tutor on social change issues, and a grandmother.

[OPINION] Will racism against Natalius Pigai impact Papuans-Indonesians relationship?
Urgent international intervention in the Regency of Nduga, Papua Province, Indonesia : Open Letter
The origin of Indonesian racism towards Papuans and its implication to a Free West Papua Movement
Who actually benefits from the Trans Papua Highway?
Do you know how vital Papua is for the environment?
Father Neles Kebadabi Tebay – ‘a pioneer’
Comment

Who actually benefits from the Trans Papua Highway?

Do you know how vital Papua is for the environment? 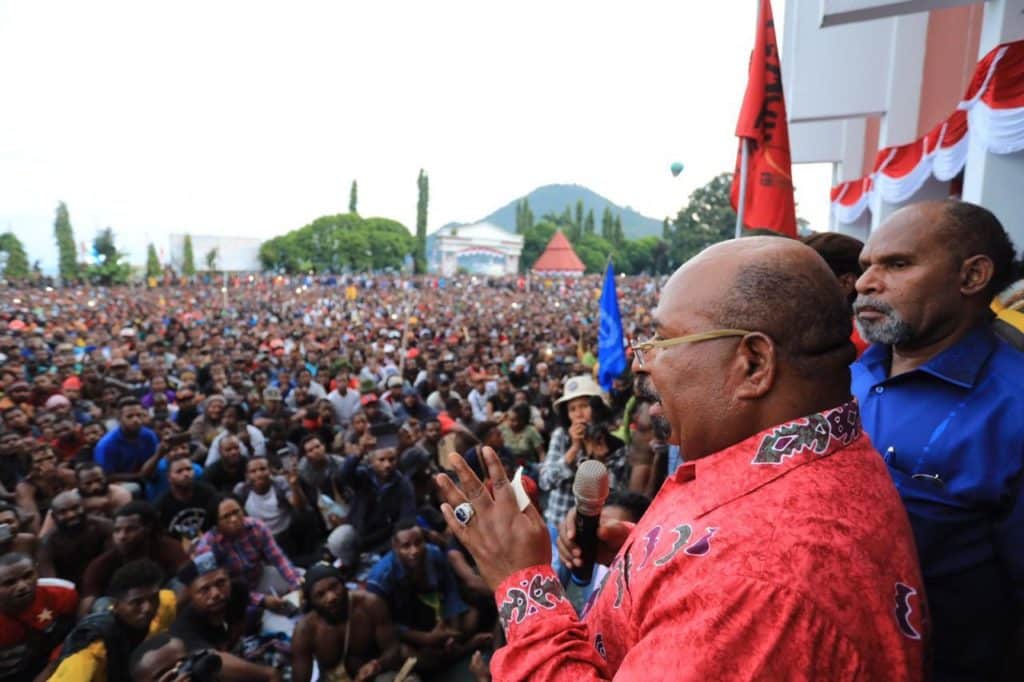 Who actually benefits from the Trans Papua Highway?

Do you know how vital Papua is for the environment?

By Benjamin Ware DO you know how vital Papua is for the environment? This province… 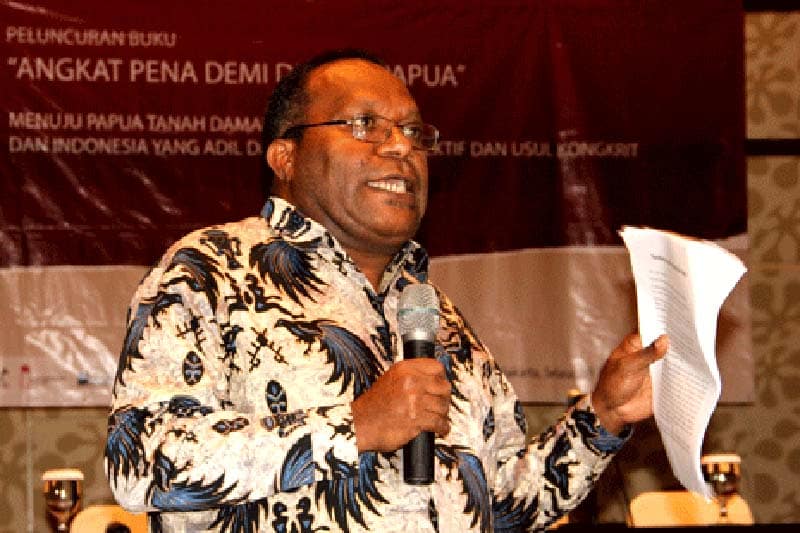